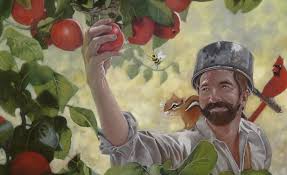 When my daughter Molly recently asked me my favorite Bible verse, I didn’t have an answer ready.

“I have lots of favorites!” I told her. “I guess it depends on the week you ask me.”

But Molly was persistent, as she always is. She wanted an answer, yet it still was difficult for me to narrow down the list.

One of the verses I mentioned to her is Psalm 23:6: “Surely goodness and mercy shall follow me all the days of my life; and I will dwell in the house of the Lord forever.”

Notice the incredible confidence King David expressed when he wrote these words. He was certain that if he followed the Lord as his Good Shepherd, he would experience blessings in this present life that would carry all the way into eternity.

David’s words began to resonate in my heart last summer. I was on a sabbatical, pondering what kind of “legacy” I was leaving. As I prayed about how to have a greater impact in the years ahead, I kept thinking of the example of Johnny Appleseed and the awesome long-term power of sowing seeds.

Johnny Appleseed’s actual name was John Chapman, and he lived from 1774 to 1845. He was a pioneer nurseryman who introduced apple trees to large parts of Pennsylvania, Ontario, Ohio, Indiana, Illinois, and the northern counties of present-day West Virginia. In pursuit of his mission, he traversed 100,000 square miles of Midwestern wilderness and prairie.

Johnny became a legend while still alive, due to his kind, generous ways, his leadership in conservation, and the symbolic importance he attributed to apples. He also was a Christian missionary, sowing seeds of the Gospel while planting apple orchards to benefit the growing number of pioneers. After his death, he became the inspiration for many museums and historical sites, not to mention numerous animated movies to tell his story to future generations.

In studying Johnny’s life, I was amazed by the ways his legacy outlasted him. In addition to planting countless apple trees for others, he left an estate of over 1,200 acres of valuable nurseries to his sister. He also owned four plots in Allen County, Indiana, including a nursery in Milan Township that had 15,000 trees. In Nova, Ohio, there’s still an apple tree planted by Johnny – bearing fruit more than 175 years after his death.

So…I want to be more like Johnny Appleseed. Day after day, I want to sow seeds of God’s “goodness and mercy” to everyone I meet, whether they are believers or unbelievers. Yes, I’m excited about dwelling in the Lord’s house forever in eternity, but I want to leave a legacy behind me when I go.

If Johnny Appleseed’s trees could still bear fruit more than 175 after he passed from this life, I pray that some of my seeds will bear long-lasting fruit as well.

What kinds of seeds are you sowing today? The type of seeds will determine the type of legacy you leave. There may not be any museums or movies made to commemorate your life, but people in heaven will one day give you thanks.