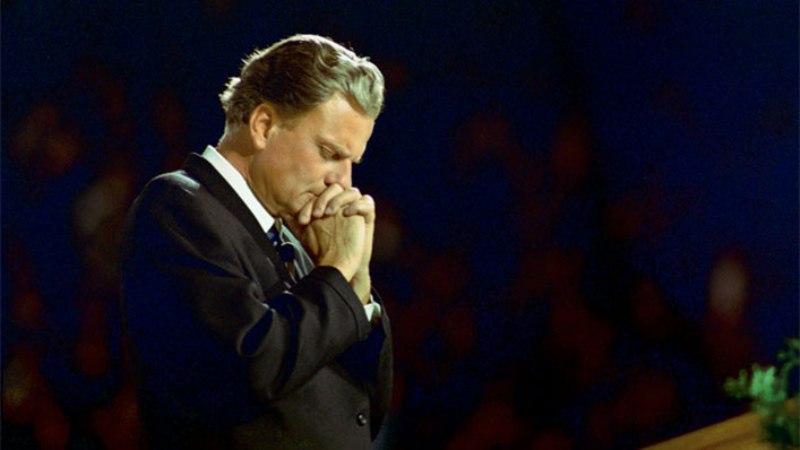 Billy Graham once told a humorous story revealing how he could stay so humble, even while accomplishing so much. He was an evangelical superstar, to say the least. Yet when one of his long-time friends reflecting on Graham’s ministry, he said, “Billy always saw himself as just a farm boy from Mecklenburg County, North Carolina. He was amazed that God could use him like He did.”

Before I share Graham’s quite revealing story, it’s important to note the contrast between him and many of the other televangelists of his era. There were numerous other superstars back then, but many of them eventually flamed out because of scandals – their reputation and ministry destroyed because of money, sex, and power.

Like Graham, the others had charisma. But the thing that truly set Graham apart was his character. Above all, his humility stands out as the key ingredient for how he handled his great success.

WHO DESERVES THE APPLAUSE?

Billy Graham told a fanciful story that can help us understand his humility.

Graham reminded people about the Bible’s account of a young donkey that carried Jesus down the Mount of Olives during His triumphal entry into Jerusalem (Luke 19:28-40). Adding a bit to the story, Graham described how the colt was talking to one of his fellow donkeys later that day:

“You’ll never guess what happened to me today.”

“What?” his friend inquired.

“As I was coming into town, everyone bowed down and laid palm branches and garments in the road to greet me!” the donkey exclaimed. “They all shouted, ‘Hosanna. Blessed is he who comes in the name of the Lord.’”

“That’s incredible,” marveled his friend. “I’ve been down that road numerous times, and no one ever gave me that kind of reception. How did you ever merit such treatment?”

“Well, I always knew I would be famous someday,” the young donkey explained. “It’s about time I got the respect I deserve!”

While some Christian leaders make the same mistake as the donkey that carried Jesus, Billy Graham always recognized that the crowd’s adulation was for Jesus, not for him.

You see, when Jesus is “riding us,” there may indeed be applause from the crowd at times. But we must never forget that the hosannas are not for us, but for the One who accompanies us. True humility knows who the applause is for, and that’s why the humble will ultimately cast all their crowns and accomplishments at His feet:

The twenty‑four elders fall down before Him who sits on the throne and worship Him who lives forever and ever, and cast their crowns before the throne, saying: “You are worthy, O Lord, to receive glory and honor and power; for You created all things, and by Your will they exist and were created” (Revelation 4:10‑11).

Many people have speculated on what it was like when Billy Graham arrived in heaven. I’m sure it was a joyous occasion, but one thing we know for sure: Declaring the worthiness of the Lord to receive all glory and honor, Graham cast all his crowns and earthly achievements at the feet of Jesus.

I once heard another helpful story. I’m not sure the source of the story, but perhaps it came from Billy Graham as well.

An elephant and a mouse were walking together and came to a rickety old wooden bridge. As they set foot on the bridge, it rumbled and shook at the impact, making quite a disturbance.

Once they had safely reached the other side, the mouse proudly remarked, “We really shook that bridge, didn’t we!”

I love that story.

When we walk with the Lord, we can expect to see some “bridges” shake at times. However, if we aren’t careful, we’ll make the same mistake as the mouse – thinking we ourselves can take some credit for the impact. What a tragic deception.

Throughout his ministry, Billy Graham both built bridges and felt them shake. But he always kept in mind that he was just the mouse. As he humbly walked with God Almighty, the ground sometimes shook under his feet, but Graham knew he couldn’t take the credit.

Some people have said that Billy Graham was the greatest evangelist since the apostle Paul. That’s quite a statement. To me, the men had very different ministries, yet one thing they had in common was an understanding of where their power came from.

Paul described himself and other believers as merely being earthen vessels – jars of clay – “to show that this all-surpassing power is from God and not from us” (2 Corinthians 4:7 NIV).

And a profound test of any ministry is found in Paul’s statement in 2 Corinthians 4:5 (NASB): “We do not preach ourselves but Christ Jesus as Lord, and ourselves as your bond-servants for Jesus’ sake.”

This test isn’t as easy as it sounds. When people look at our publications, fundraising letters, television programs, and video promos, and other communications, do they conclude that we are exalting Christ, or merely promoting ourselves?

Although Paul was a mighty apostle, he never lost sight of the fact that he was the Lord’s bond-servant, a sinner who had received God’s amazing grace. That’s the same posture Billy Graham took, and hopefully we are taking as well.

So, let the hosannas come. Let the bridges shake. But may we never forget where the power comes from and who the applause if for.

3 thoughts on “The Secret to Billy Graham’s Humility”