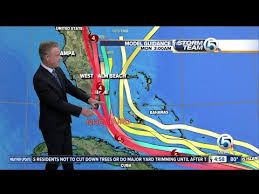 As Hurricane Irma prepares to bash the United States, here in Charlotte we’re wondering if it will be coming our way. As we wait for the answer, I’ve been intrigued by weather reports saying our region lies in the “Cone of Uncertainty.”

While modern meteorologists probably feel clever in using this term, it’s really no different than King Solomon wrote about over 2,000 years ago:

Then and now, the path of the wind is highly unpredictable. Even Jesus found it important to weigh in on this great mystery:

The wind blows where it wishes, and you hear the sound of it, but cannot tell where it comes from and where it goes (John 3:8).

As meteorologists apply the Cone of Uncertainty idea to the difficulty of projecting Irma’s destructive route, I feel prompted to write about another  kind of Cone of Uncertainty. While the uncertainty about Irma’s path will be resolved within days, I’ve observed a bigger and more long-term issue that seems quite common today…

Some people seem to live their entire lives  in a Cone of Uncertainty!

I’m not trying to be harsh, but you’ve probably met people like this. They’re continually uncertain about their standing with God, their career, their relationships, or what their priorities should be. And if they’re anything like my good friend Ron, they’re stuck in a Cone of Uncertainty in their dating life too.

So what does the Bible say about this? Lots.

Here are just a few random principles for your consideration:

Our God whom we serve is able to deliver us from the burning fiery furnace, and He will deliver us from your hand, O king. But if not, let it be known to you, O king, that we do not serve your gods, nor will we worship the gold image which you have set up (Daniel 3:16-18).

These three men were determined to trust the Lord, regardless of whether He delivered them and changed their difficult circumstances.

So there’s no need to live in a Cone of Uncertainty about whether you’ve been born again and given eternal life. Nor do you ever need to doubt God’s love or His desire to bless you and meet your needs.

This issue came up recently when I was trying to encourage a friend who was going through a hard time. “Brother, the Bible says in Romans 8:31 that if God is for us, it doesn’t matter who is against us,” I reminded him.

I thought that would settle the matter, but it didn’t.

“How do I really know that God is for me, though?” he replied.

Yikes. I could tell this was going to be a much deeper conversation than I had expected. My friend was living in a Cone of Uncertainty on an issue of supreme importance.

But take a moment to apply this to your own life and ponder my friend’s question. How can we know for sure that God is FOR us?

I suppose I could write an entire book in response to this vital query, but for now this basic explanation will have to suffice:

YOU CAN KNOW FOR SURE THAT GOD IS FOR YOU,

BECAUSE HE SENT HIS SON TO DIE FOR YOU!

Shouldn’t that be enough of an answer?

But what if you’ve been living in sin, knowingly disobedient to the precepts in God’s Word? Is He STILL for you?

Once again, the answer is actually quite simple: Even if you’re living in the deepest sin imaginable, God is still for you—He’s for you to repent so He can release the fullness of His blessings in your life once again!

You see, no matter what your situation may be, your Heavenly Father is FOR you, not against you. If you are living in a pigpen, He’s FOR you to come home so He can throw you a party (Luke 15:11-32). If you’re a stuck-up religious person like the older brother in that story, He’s FOR you to humble yourself and enter into the joyous festivities He’s prepared.

What an incredible revelation! Either way, no matter what, God is FOR you. So why not leave the Cone of Uncertainty and join the party, already in progress?