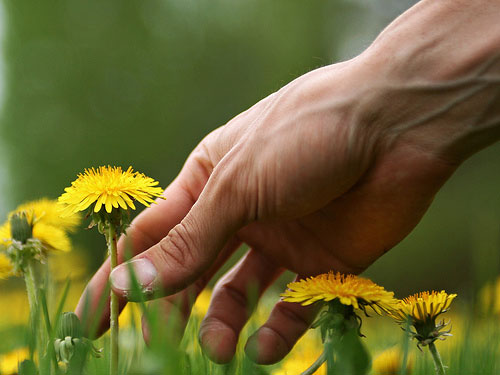 It’s already dandelion season in the Carolinas, and I’m having traumatic flashbacks to my childhood. When I was about eleven years old, my dad assigned me the summer chore of ridding our yard of dandelions.

This was no small task. We had a big yard, and every summer there were lots of dandelions.

When Dad gave me this job, he was very particular in how he wanted it done. He handed me a long wooden rod, similar to a broom handle. It was equipped with a sharp metal attachment, specially designed to dig up dandelions by their roots.

“Jimmy,” he said, “after you’ve dug out each dandelion, you must immediately put it in the garbage so the seeds don’t spread.” Dad gave me these directions with such earnestness that I felt I’d been entrusted with the most important chore ever.

After following his instructions and digging out a few dandelions, I decided to take a break until later in the day. That turned out to be a bad decision, because it was a blazing hot afternoon when I returned. As I surveyed the countless dandelions before me, I began to resent this difficult and time-consuming assignment.

But then I got an idea…

Instead of taking time to dig out the dandelions by their roots, I opted for a much easier solution: I just walked around the yard and snapped off the dandelion heads. No need for the special dandelion digger in order to do that.

By the time my dad returned from work, the yard looked great. No dandelions!

However, my plan had an unforeseen outcome. While it seemed brilliant in the short run, after just a few days the yard was filled with dandelions again. Actually, they were the same dandelions as before. They simply had resurfaced.

It didn’t take long for Dad to figure out I had taken a shortcut instead of following his instructions. He handed me the dandelion digger once again, telling me to do the job right this time.

So now you know why dandelions still trigger unpleasant memories for me.

But as I’m reflecting on the story this year, I’m more aware than ever that the Dandelion Principle is one of life’s greatest lessons: When dealing with a problem, we must dig out the roots instead of only dealing with the symptoms.

Think of how profound this is…

As I discovered that hot summer when told to eradicate our dandelions, the only smart approach to problem-solving is to dig deep and address the roots. Shortcuts will always be tempting, of course. But whenever we go with the lazy, shortsighted approach, the dandelions will surely return—and usually return quickly.

Although I’m a lot older now, I still have a tendency to address my problems by masking the symptoms rather than digging out the roots. If you’re like me, there may be some longstanding issues in your life where you’ve taken the same approach, and gotten the same results.

With God’s help, let’s resolve today that we’ll do whatever is necessary to truly uproot the bothersome weeds in our lives—not just temporarily, but once and for all.