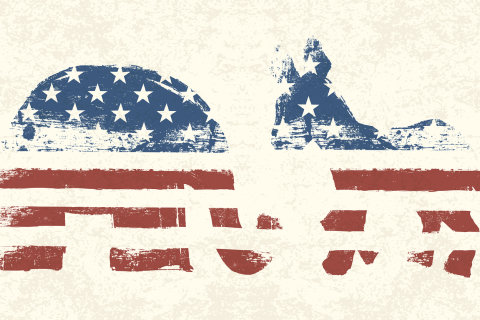 One of the fascinating aspects of each election cycle is to watch both Democrats and Republicans imply that God is certainly on their side of the issues. Meanwhile, theologians debate whether God is a Calvinist or Arminian. And sometimes entire nations—especially the United States—portray themselves as being on the side of God and righteousness.

So how can we tell whose side is God really on?

There’s a great story in Joshua 5:13-15 that should give us cause for concern on this subject. The scene takes place shortly before Joshua is planning to lead the Israelites against the formidable city of Jericho. This was the first step in his campaign to take possession of the Promised Land, and Joshua was facing some anxiety.

As he was gazing at Jericho in preparation for the coming events, Joshua was suddenly confronted with a mighty angel of the Lord, with his sword drawn for battle. The angel clearly would be a formidable warrior, and Joshua certainly hoped he had come to fight on the side of the Israelites.

“Are You for us or for our adversaries?” was his logical question for the angel (v. 13).

However, the angel didn’t frame his answer the way Joshua might have hoped: “No,” the angel replied, “but as Commander of the army of the Lord I have now come” (v. 14).

Do you see the irony here? Joshua hadn’t asked a yes or no question. He wanted to know—as we all do—whether God was going to fight on his side or his enemy’s side.

But God never comes to take sides—He comes to take over! The angel’s reply let Joshua see an important insight about spiritual or political battles: Instead of trying to get God to fight on our side, we had better humble ourselves to make sure we are aligning ourselves with His side.

Joshua got the message loud and clear. Falling on his face to the earth, he worshiped God and said, “What does my Lord say to His servant?” Liking this response, the Commander of the Lord’s army told Joshua to take off his sandals, for he was standing on holy ground (vs. 14-15).

What a great model for us as well. The Bible declares, “If God is for us, who can be against us?” (Romans 8:31). But the surest way to know that God is truly “for us” is to make sure our highest objective is to seek His kingdom and accomplish His will. When we’re willing to do that, Jericho will be no match for us.

If the recent election was won by the political candidate you supported, here’s my advice: Don’t stop praying!

And if your preferred candidate lost the recent election, here’s my advice: Don’t stop praying!

Rather than either gloating in victory or moaning in defeat, it’s now more important than ever to seek God’s grace and favor on the nation. That will only happen when we lay aside our personal assumptions and agendas, seeking His kingdom and glory above all.