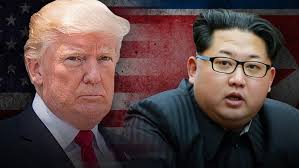 Twice before, I set out to write this blog.

The first time was a month ago, when it was first announced that President Trump had agreed to meet with the North Korean dictator. I whimsically thought about suggesting to Trump that he challenge Kim Jong Un to a Twitter War – because I wasn’t sure North Korea even had access to Twitter yet. It would have been an easy victory for the American side.

The second opportunity for this blog came just over a week ago. Hope Hicks, a longtime friend and advisor to the Trump family, resigned and left her position as White House communications director. This presented me with some great possibilities for provocative blog headlines:

WHITE HOUSE NO LONGER HAS HOPE

Yet the reality is that President Trump doesn’t seem to have lost hope at all. He’s as optimistic as ever, touting great improvements in both the economy and the country’s military readiness. He says the unemployment rate has never been lower for Blacks and Hispanics, something everyone should be cheering about.

Does the country share the President’s rosy outlook? Some people do and some clearly don’t.

In an effort to maintain my friendships, I would rather not say much about the President in a blog post, which inevitably would make some people mad.

It would certainly be less risky to write a blog about how bad Kim Jong Un is. The only person who seems to like him is former NBA star Dennis Rodman. But it probably would be pointless to spend time reminding people of the evils of Kim Jong Un and his nuclear program, wouldn’t it?

So I’ve decided that, instead of talking about President Trump directly, for comparison purposes I’ll start by mentioning a few of the issues I’ve had with the past four Presidents (George H.W. Bush, Bill Clinton, George W. Bush, and Barack Obama):

If you’ve been paying any attention to the news lately, you’ll have to admit that many of these issues are ongoing with the nation’s current leadership, and in some cases are worse than ever. As of today, we’re not even close to “draining the swamp” in Washington.

So how are Bible-believing Christians supposed to maintain hope, when national leaders have so often let us down?

Perhaps you’ve seen the recent movie, “Paul, Apostle of Christ.” Although several of my friends wrote sterling reviews about the film, I didn’t like it. In fact, I found it so slow-moving that I fell asleep a couple of times. I’ll never understand how movie producers could take an exciting life like Paul’s and create a boring movie.

However, the movie did indeed illustrate a few important points about maintaining hope. Its backdrop was the reign of Nero Caesar, a deranged and brutal Roman emperor. He was feeding Christians to the lions and using them as torches to light up the city at night. There were no signs of things getting any better, and some church members thought it best to flee.

How are believers supposed to maintain hope during such times? Actually, that question is a common theme throughout the Bible. God’s people sometimes lived in Egypt as Pharaoh’s slaves or in Babylon during King Nebuchadnezzar’s reign. At other times, they had their own nation, but were ruled by brutal, idolatrous kings.

Whether times were good or times were bad, God never told His people to place their hope in the human leaders who ruled their nation. Instead, they were given glimpses into the heavenly realm, where the Lord Himself was still ruling the universe:

If you are depending on President Trump or any other human leader to drain the swamp, I encourage you to set your sights much higher – to the One sitting on the throne of heaven. Only the Lord can heal our land, and He’s already provided us with specific requirements for how that can happen (2 Chronicles 7:14).

Ironically, the same principle holds true whether you are overly relying upon President Trump or whether you are terrified  by what leaders like Trump, Putin, or Kim might do. Psalm 2 describes a scene where the world is in turmoil and its leaders are plotting evil. Amid the chaos, God interjects, “I have set My King on My holy hill of Zion”  (v. 6).

Isn’t that good to know?

Regardless of what you may think of today’s world leaders – whether positive or negative – never forget that a King has been permanently installed in heaven. Yes, “Hope” may have left the White House, but hope should never  leave the hearts of the people of God.