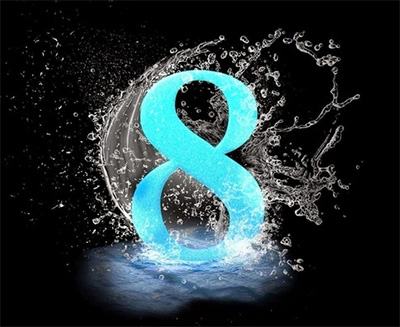 I’ve never spent much time thinking about Biblical numerology. But this year is different.

As we enter into 2018, I find myself thinking about the number “8” – God’s number of resurrection and new beginnings.

If you want a detailed explanation, I suggest a Google search. But here are a few simple observations:

Perhaps you’re not very interested in Biblical numerology, but here’s a message that can be life-changing:

Let me explain, using the story in 1 Samuel 16 of how David was selected among 7 other options …

The chapter begins with the Lord telling the prophet Samuel to visit Jesse’s house to anoint one of his sons as the next king. Seeing Jesse’s oldest son, Eliab, Samuel immediately assumed this was the one he should anoint as king.

You and I might have jumped to the same conclusion, assuming that the first option was the best option. However, if we’re wise, we will heed the Lord’s warning to Samuel:

Do not look at his appearance or at his physical stature, because I have refused him. For the Lord does not see as man sees; for man looks at the outward appearance, but the Lord looks at the heart (1 Samuel 16:7).

Let’s be honest: We’ve all failed this test at one time or another. We’ve looked at the “outward appearance” of things instead of discerning God’s choice and matters of the heart. We’ve been so eager to resolve a matter that we didn’t wait for the best option to appear.

In many ways, this was how the previous king had been selected. Saul was tall and handsome, coming from a good family and seeming to have a servant’s heart. Yet the choice turned out to be disastrous. This time Samuel wanted to make sure they got things right, so he intently listened to God’s instructions.

One by one, Jesse paraded his sons before Samuel. After Eliab came Abinadab, Shammah, and 7 sons in all. He must have been shocked when the prophet informed him after seeing the first 7 options, “The Lord has not chosen these” (v. 10).

Perhaps this is exactly where you find yourself as we enter 2018. You applied for jobs that seemed promising, but the door was always closed. You dated someone you had hopes of marrying, but things fell through. You found a publisher you wanted to handle your book, but they turned you down. You and your spouse had hopes of being pregnant by now, but somehow it still hasn’t happened.

In the case of Samuel, 7 very promising options appeared, yet the Lord refused to bless any of them. What could the problem be?

As the story unfolds, we see that God turned down the first 7 options for a very good reason: He had something BETTER in mind!

Samuel probably felt some frustration at this point. He had attempted to meticulously follow God’s instructions, only to reach an apparent dead end. Can you relate?

“Are ALL the young men here?”  he finally asked Jesse.

Jesse replied that, yes indeed, there was an 8th option: “There remains yet the youngest, and there he is, keeping the sheep” (v. 11).

Don’t you love how Jesse says this? “There remains…” another option. Even when you feel like you’ve already exhausted all the options, it’s good to know that God isn’t done yet!

However, Jesse played down the qualifications of his son David. After all, he was the youngest of the sons, consigned to take care of the sheep while the older brothers were invited to attend Samuel’s prestigious gathering.

In the same way, perhaps there’s an option you’ve overlooked. Maybe there’s someone who’s not even on your radar screen right now, but they are called to be a vital part of your life or your team. Perhaps they’re an afterthought, not even invited to the party.

After Samuel took oil and anointed David in the presence of his very surprised brothers, “the Spirit of the Lord came upon David from that day forward” (v. 13).

Notice that something changed  for David that day. Although he probably was already a godly young man, no one seemed to recognize any special gifts or spiritual empowerment until Samuel anointed him. This day was a new beginning for David – and ultimately for the entire nation of Israel.

As we head into 2018, I hear many of you saying to yourself, “I feel like I’m running out of options.”  That could be a FANTASTIC place to be!

Remember: Only after Samuel ran out of visible options did he discover the 8th option – GOD’S option. And David not only was the last  option…he also was the best  option.

I’m praying for you today. Although you may be growing weary of “hope deferred”  (Proverbs 13:12), the answer to your hopes and dreams may be right around the corner.