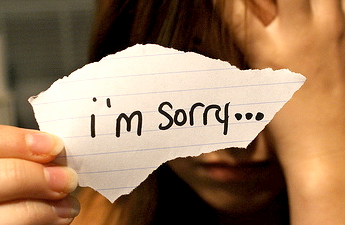 I’m writing this on the Jewish Day of Atonement (Yom Kippur), and I can’t help thinking about a Biblical word that’s been in the news a lot lately: contrition. While this isn’t meant to be a political blog post, I think it’s important to read today’s headlines with an understanding of the nature of true repentance and contrition.

I recognize that dealing with this issue can easily lead to Phariseeism, as if others have been guilty of false contrition, while I’ve managed to escape such foibles. And even though the Bible provides many telltale signs of false contrition, I admit that it’s always dangerous to judge another person’s heart.

Contrition never comes easily. None of us enjoys humbling ourself and contritely acknowledging our sins and shortcomings. And, as Jesus pointed out, it’s all too easy to notice the speck in our neighbor’s eye, while excusing the plank in our own eye (Matthew 7:3).

The story of true and false contrition begins in the Garden of Eden, so it’s no wonder these are such deeply ingrained tendencies, not easily shaken. Yet if we don’t deal with the blind spots in our own lives, there is certainly no hope for repentance on a national or international level.

Although an entire book could be written on the nature of true contrition, here are some highlights of what we can learn from the Scriptures:

King Saul was a master at this kind of blame-shifting. When rebuked by the prophet Samuel for impatiently offering a burnt offering, Saul claimed it was Samuel’s fault for not arriving on time (1 Samuel 13:1-14). False contrition always finds some lame explanation or pins the blame on someone else.

In light of this, it’s interesting that when Donald Trump apologized for his inappropriate sexual banter 11 years ago, he couldn’t resist adding that Bill Clinton’s sins were certainly much worse than his.

And who could forget Hillary Clinton blaming “the vast rightwing conspiracy” in the 1990s when the news media asked about her husband’s infidelities?

Seems like not much has changed since the Garden of Eden.

Meanwhile, Hillary Clinton says it was just a “mistake” to do State Department business on a private email server in her home—even though the mistake potentially exposed the nation and its covert operatives to great danger if her emails were hacked.

Once again, Saul was a prime example of how not to show true contrition. He consistently minimized or explained away his offenses. After he disobeyed God’s instructions in 1 Samuel 15:1-29, he offered the “religious” explanation that he was merely keeping back the best of the sheep to sacrifice to the Lord. When he realized Samuel wouldn’t buy that spiritual-sounding argument, he essentially said, “Okay, I have sinned. But now let me get on with what I was doing.”

With Saul oblivious to the seriousness of his actions, Samuel told him the shocking news, “The Lord has rejected you from being king” (vs. 24-26). False contrition typically expects to suffer no consequences from our sins, but there will be consequences nevertheless.

But this certainly isn’t an issue confined to politicians of just one party. Remember Nixon’s attempted cover-ups during Watergate? And do you think Donald Trump would ever confess offenses that weren’t caught on video?

Even King David seemed prone to denial and cover-up. Somehow he avoided remorse over his adultery with Bathsheba and murder of her husband until he was confronted by Nathan the prophet (2 Samuel 12).

Yet once his sin was exposed, David responded quite differently than Saul. His repentance was both deep and complete (Psalm 51). No minimizing. No rationalizing. No blaming of others. No plea bargaining.

In stark contrast to Saul, David recognized the severity of his sins and his desperate need for the mercy and forgiveness of God. And rather than just showing contrition in order to rehabilitate his imagine or gain respectability in the eyes of people, David sought something much deeper: a clean heart and right standing again with the Lord.

Isn’t it stunning how easily we can excuse and explain away the sins of the politicians we like—those of our own party or political philosophy—while harshly judging those we think should be defeated. Morality and righteousness have been put on a sliding scale, depending on the outcome we desire, rather than on God’s unchanging truth.

We should all be thankful we’re not running for President, because it would be brutal to have our own sins and dirty laundry exposed in the glaring light of the media. As the psalmist correctly noted, “If You, Lord, should mark iniquities, O Lord, who could stand? But there is forgiveness with You, that You may be feared” (Psalm 130:3-4).

You see, contrition is not just something our nation needs—it must start with you and me. And thank God, we have every reason to be honest about our sins rather than try to hide them (Proverbs 28:13, 1 John 1:9). Because of the atoning sacrifice of Jesus, we have a Defense Attorney who can truly forgive and erase our misdeeds (1 John 2:1-2).

Before we decide who to vote for, let’s ask God to search our own hearts and expose our wicked ways (Psalm 139:23-24). He promises to dwell with those who have “a contrite and humble spirit” (Isaiah 57:15), and we still seem a long way from that now.