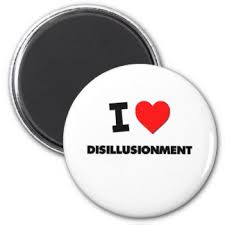 If you’re feeling disillusioned today, you should be thankful. Why? Because disillusionment is an essential part of coming to terms with reality, which is the only way your life can be transformed.

We all need to be dis-illusioned from time to time—because that means being freed from our illusions. Dictionaries define an “illusion” as “a false mental image produced by misinterpretation of things that actually exist.” Until disillusionment has occurred in our lives, we’re walking in unreality, unable to experience authentic vision.

If you’re honest, you’ll admit that you’ve faced various kinds of disillusionment at one time or another in your life. Perhaps you’ve found yourself disillusioned about the goodness of humanity…the “happily ever after” of your marriage vows…your success as a parent…or God’s desire and ability to work out all things for your good. Or maybe you’ve been disillusioned about the Lord’s promises to heal you sicknesses or provide for your financial needs.

Jesus’ death on the cross was the most disillusioning event in history. His closest followers were devastated. After having high expectations during His triumphal entry into Jerusalem (John 12:12-19), a week later they were hiding out in a locked room for fear of the Jews (John 20:19). Peter and some of the other disciples even sought comfort in turning back to their old occupation of fishing (John 21).

The pain of disillusionment can also be felt in the words of the two disciples walking to Emmaus: “We were hoping that it was He who was going to redeem Israel” (Luke 24:21). Perhaps there was something that you too “were hoping” that failed to come to pass in the way you expected. Your “hoped deferred” has made you heartsick (Proverbs 13:12). But if so, be on the alert—Jesus may be right there walking with you at the very moment you’re complaining that He’s abandoned you.

God, in His painful mercy, will often strip us of false expectations. The disillusioned disciples couldn’t point to any promise Jesus failed to keep. Instead, their disappointment was rooted in their false belief that He would overthrow the Romans and set up an earthly kingdom. Until we are stripped of our own dreams, God can’t give us His dreams—which are far better!

God shakes our false hopes so He can give us a hope that cannot be shaken (Hebrews 12:26), hope that serves as an “anchor for the soul” (Hebrews 6:19). Not only do the times of testing reveal our faulty belief systems, they also prove the faithfulness of the “heavenly vision” we have been truly given by God (Acts 26:19).

The pages of Scripture are filled with examples of men and women of God who had great vision, yet faced times of severe disillusionment. Moses, David, and Elijah were among those who evidenced great depression and discouragement.

Jeremiah once accused God of being unreliable and of deceiving him (Jeremiah 15:18). At another point he was so tired of persecution that he declared he would no longer speak the word of the Lord (Jeremiah 20:7-9).

John the Baptist had boldly declaring that Jesus was the lamb of God who would take away the sin of the world (John 1:29). But he became so discouraged in his prison cell that he questioned whether Jesus was truly the Messiah or not: “Are you really the one we are waiting for, or shall we keep on looking?” (Matthew 11:3 TLB)

These examples illustrate an important lesson: If you’ve been disillusioned, you’re in good company! Disillusionment was experienced by David, Elijah, Jeremiah, John the Baptist, Jesus’ disciples—and probably every Christian who has ever lived.

Although the Lord can dramatically appear and erase our discouragement in a moment, He often chooses to use a process. If you are currently facing the dark night of disillusionment, here are some important lessons that can speed your recovery:

Recognize disillusionment’s inevitability. You might as well not take your situation personally, for this is a condition that everyone will face.

Repent of the false beliefs (illusions) that have caused your disillusionment. The entire book of Job deals with the painful process by which Job was set free from false beliefs. Often our illusions affect a few key areas of our life:

Even though God wants to deliver us from our illusions, He certainly does not want us to stop dreaming big dreams of faith. While illusions are false beliefs—idols of our own making—dreams of faith are God-inspired vision. Such dreams are an indispensable trait of any successful endeavor.

When are you too old to dream such dreams? Never! God promises, “In the last days…your young men shall see visions. Your old men shall dream dreams” (Acts 2:17). This should be an incredible encouragement to us to never quit dreaming, for even old people are supposed to have dreams. Rather than becoming cynical as we age, God wants us to gain ever-increasing faith and vision.

Yes, our aspirations and hopes may be stripped for a time. We may well face the “death of a vision” we felt was from the Lord. Yet God is a God of resurrection. Even as He allows us to pass through the Valley of Disillusionment, it’s all part of His process to raise up an army of dreamers, not afraid to dream dreams and take bold steps of faith to extend His kingdom.

The pain of disillusionment can be replaced with a tidal wave of joy. How do I know? Because “weeping may last through the night, but joy comes with the morning” (Psalm 30:5). If you’re currently experiencing a dark night of disillusionment, it doesn’t have to last forever. Joy is on the way!