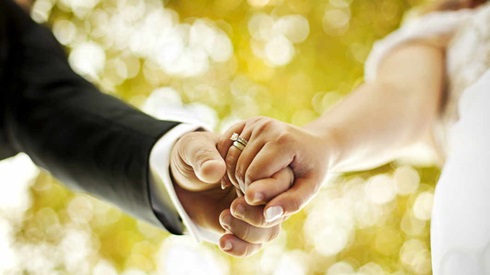 My good friend Ron is at it again. Still agonizing over what went wrong with his marriage, he wants to make sure he doesn’t make the same mistakes if he finds a new wife.

“After all these years, women are still a puzzlement to me,” he told me. “Even if God sent me a great woman to marry, at this point I’m not sure I would even know the necessary ingredients for a happy marriage.”

Ron and I had often lamented that good marriages are in short supply these days. But attempting to give my friend some guidance, I tried to offer some hope by demystifying the subject.

“Have you ever heard of the Marriage Matrix, Ron?” I asked.

“I think I may have seen the movie years ago,” he replied.

“No, Ron, I’m pretty sure there’s never been a movie on this yet,” I laughed.

Sensing a teachable moment for my good friend, I set out to describe the 6 key components of the Marriage Matrix.

“Okay, Ron,” I began, “the starting point is the principle of ONENESS. From the very beginning, God’s plan was to make the man and woman so united that they could be described as truly ‘one.’”

“Not an easy task,” Ron muttered.

“Humanly speaking, it’s an impossible  task,” I chuckled. Ecclesiastes 4:9-12 says we need God Himself to be the ‘third strand’ that holds our union together.”

“So how’s a guy supposed to figure out whether someone could be a suitable partner?” he asked. “Sometimes I think men and women are fundamentally incompatible!”

“You’ve definitely got a point there, Ron. That’s where the Marriage Matrix comes in. When we recognize the six necessary areas of compatibility for a happy marriage, at least we know what we’re shooting for.”

I proceeded to draw a six-pointed star on the napkin at our table and began to explain what each point represented.

“The first 3 points on the star stand for the 3 fundamental areas of the human design: spirit, soul, and body. Each of these areas is a crucial part of a strong marriage foundation.”

At first Ron thought I was just giving him a bunch of religious platitudes. “That sounds nice, but how does a strong marriage reflect those 3 things?

“Each of us is a spiritual being, Ron, and a healthy marriage acknowledges and cultivates that aspect of each partner. Although it’s not always easy for a couple to pray, study the Bible, and worship together, that spiritual component is important glue in holding the relationship together. That’s why it’s generally true that ‘The couple that prays together, stays together.’”

“Okay, so all I need to do is be more spiritual, and my next marriage is guaranteed to work?” he queried with considerable skepticism.

“No, there are 5 other ingredients, Ron!” I reminded him. “For example, our soul is the area involving our mind, emotions, and personality. In terms of a marriage, it means maintaining a healthy friendship, good lines of communication, and a strong foundation of trust.”

Ron was eager to jump ahead to the next ingredient. “Okay, I think I’m beginning to get it, Jim,” he assured me. “So I guess the ‘body’ part is all about sex?”

“Well, sex is part of it, Ron,” I patiently explained. “But physical touch can involve expressing affection in a wide variety of ways, not necessarily involving intercourse at all.”

“Spirit, soul, and body…” Ron interrupted. “Those are only 3 areas. I thought you said there are 6.”

“Glad you’ve been paying attention, Ron!” I complimented him. “The first 3 areas are foundational. But the next ingredients are also important, dealing with 3 practical pressure points that undermine many marriages today: finances, fighting, and fun.”

Ron readily acknowledged that financial problems were one of the biggest causes of his marriage breakup. “I was a miser, and my wife was a spendthrift,” he shared. “I was a fan of Dave Ramsey’s philosophy of frugality, but she hated to be confined to any budget. We also disagreed on our charitable giving and the proper amount to spend on vacations. It seems like we could never get on the same page in our handling of money.”

“Ah…conflict!” I observed. “That brings us to the fifth component of a happy marriage: fighting,”

“Don’t you mean that happy couples try to avoid  fighting?” he protested.

“No, Ron, you’ve got it wrong,” I challenged him. “A couple that never fights is often in big trouble! Disagreements are an inevitable part of any  relationship. So the goal is not to sweep disagreements under the rug, but rather to learn to ‘fight fair’ and come to healthy resolutions of your conflicts.”

My friend suddenly began to realize another destructive aspect of his failed marriage. “I see what you’re saying, Jim. When conflicts arose in my marriage, I tended to clam up, but my wife tended to blow up. Neither of us were very good at talking things through.”

“Well, another important part of ‘fighting fair’ is learning to forgive,” I added. “How did you and your wife do with that?”

“Not very good!” Ron confessed. “I guess we were both pretty stubborn. Sometimes we gave each other a cold shoulder for several weeks after a fight. The sun went down on our anger far too often.”

“Fighting and forgiveness definitely go together, Ron,” I pointed out. “Are you ready now for the sixth and final component of the Marriage Matrix?”

“Sure!” he encouraged me. “This has been pretty interesting. My wife and I clearly violated many of the principles you’re sharing. I just chalked it up to a ‘personality conflict,’ but it was a lot more than that.”

“Even though friendship, trust, affection, and forgiveness are all important, the final component of the matrix is also crucial to the overall health of the relationship,” I offered. “Yet it’s something many couples – especially Christian couples – easily tend to forget.”

“I think you said the final component is about having ‘fun.’ Tell me what you mean by that.”

“My wife and I had lots of fun and adventure before we got married,” Ron reflected. “But once we had kids and got busy in our careers, the fun was replaced. Instead of enjoying life together, we became more like business partners.”

Before praying together and asking the Lord for His help in all these things, Ron and I took a few minutes to review what we had discussed. I decided to put the 6 attributes of a happy marriage in slightly different terms:

As I described my discussion with Ron about these 6 principles, what did you learn about the strengths or weaknesses of your own marriage or past marriage? Remember: The oneness God planned for your marriage is a supernatural sort of thing, only fully possible when you die to yourself and seek His help.

Psalm 127:1 says it well: “Unless the Lord builds the house, they labor in vain who build it.” Not only is He the architect of happy marriages, but He wants to be the builder as well.